Discover The Power Of Dermaroller.

The inside track on Angelina’s skincare secret… 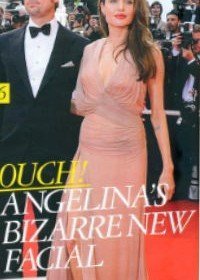 For seriously stunning results, sometimes you have to get serious with your treatment regime. Ashley Pallett investigates Dermaroller™, the treatment rumoured to be the secret behind Angelina’s amazing complexion…

Ladies (and gents), I’m not going to lie to you. The first time I encountered Dermaroller™, I was a little bit scared. Let’s not beat around the bush – the Dermaroller™ is a medical device that’s made up of thousands of micro-medical needles. Needles that go into your skin. I saw the needles, wobbled a bit… then saw the results.

And it’s said to be the secret behind the red-carpet glow of many celebs including the seemingly ageless Angelina Jolie (and Brad’s much-improved acne-pitting). So despite the initial fear of the needle, for many fabulous fashionistas and A-list sorts, the results outweigh the scare-factor…

How does is work?

Dermaroller™ is a simple treatment, but must be carried out in a hygienic environment by a trained clinician. You’ll arrive for your appointment, and after cleansing, your practitioner will apply a topical anaesthetic (in gel or cream form). This will activate for 20-30 minutes and once your skin is numb, the procedure will begin.

The skin treatment itself takes 30 minutes, during which the Dermaroller™ will be passed over the area to be treated (face or body) – and you won’t feel a thing as your skin is numbed by the topical anaesthetic.

After the trauma inflicted by the microneedles, the skin regenerates and repairs itself, with beautiful results.

It’s essentially ‘tricked’ into thinking the entire treatment area has been wounded, increasing bloodflow, skin cell generation and collagen formation in the area. Aesthetically, signs of scarring are minimised as skin regenerates from deep within, appearing smoother, firmer, plumper and fuller.

Absolutely not. You won’t feel anything during the procedure as the skin is numbed by anaesthetic. Afterwards, you’ll feel a bit tender, but this will improve by the following day. There is no scabbing, as the needles are incredibly fine, but your skin may be a little dryer than normal – we’ll recommend an appropriate hydrator for your skin type.

That said, Dermaroller™ isn’t a lunchtime treatment – your skin will look pink and sunburnt for a couple of hours after treatment. What’s more, practitioners advise that you don’t wear makeup straight afterwards for 24hrs.

I’d suggest timing a Dermaroller™ for a Saturday night in – pop in for an afternoon treatment, then head home for a movie and a vino or two! You may still look a little pink on the Sunday, but you’ll be back to normal for work on Monday, and results will start to appear in the following weeks – peaking at 6 weeks after treatment and lasting up to two years.

What’s more, genuine Dermaroller™ is the only dermaroller device CE-marked as a medical device. It was originally developed by dedicated clinicians working to improve the appearance of surgical scars using medical tattoos – genuine Dermaroller™ was the first, and by far the best!

Results to rival injectables and peels

So far, DestinationSkin has completed thousands of Dermaroller™ treatment programmes, and our clinical team believes that it is a fantastic tool in the perfecting arsenal. If you want to look younger naturally, and don’t feel that injectables are right for you, it’s a great option.

What’s more, the DS team has observed – anecdotally within our clinics – that results are more dramatic than peels with equivalent downtime.

The safe alternative to surgery

The best thing about Dermaroller™ is that the results you see are 100% natural – it’s your collagen, so there is no risk of looking fake.

Of course, results won’t be as dramatic as a facelift, and they are gradual – appearing and improving over 6-10 weeks. But that, in my opinion, is one of the strengths of the treatment… it’s gradual, subtle, safe and natural.

There’s no risk of overstretching the skin for an unnatural ‘wind tunnel’ look, and no risk of or surgical complications or nasty infections like MRSA, and the results last for up to two years.

I think, personally, I’d more likely to go down the Dermaroller™ route than any other – though hopefully I’ve a little while longer before I have to start worrying about too many visible signs of ageing.

Whichever way you look at it, it’s not a treatment for the fainthearted. But if you want serious results when it comes to scarring (including acne pitting and acne scars), stretchmarks, and the visible signs of premature aging, Dermaroller™ is nothing short of revolutionary.

So why not pop in-clinic for a consultation?

Our booking procedure is quick and easy. Simply fill out this form and we’ll call you to book you an appointment with one of our experts.

We use cookies to ensure that we give you the best experience on our website. If you continue to use this site we will assume that you are happy with it.Ok